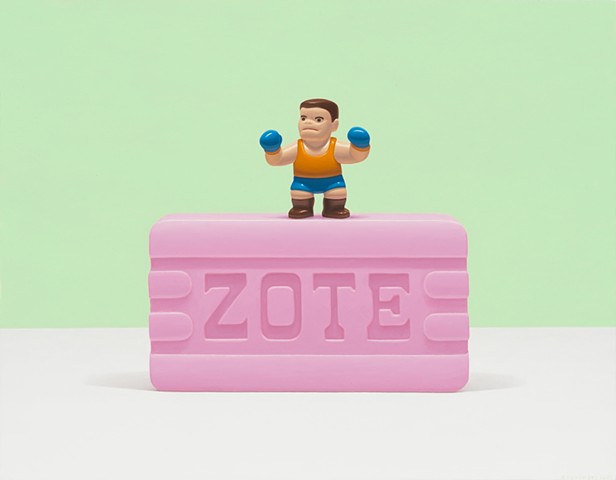 Viewer, stay alert! Don't for a moment say to yourself, "Well, this work is so clever and amusing, charming and viewer-friendly, witty and amiable, and easy on the eyes, and quick to read, that it can't be all that serious or important." Because if there is an artist anywhere today who can lull you into a sense of uncritical relaxation more than Chris Cosnowski does, who appears to be completely without guile and your complicit partner in really good fun, and who wants you to share with him just how many visually cool things there are, I don't know who he or she is. Let's face it - Chris Cosnowski's visual repertoire is a literal barrel of monkey and includes, well, barrels of monkeys, bowling trophies, plastic soldiers, superhero action figures, whoopee cushions, toy merry-go-rounds, plastic clowns, toy cop cars and more, all transcribed in bright and vivacious colors and rendered with what Salvador Dali once called - speaking of his own work, of course - "the most imperialist fury of precision." The Cosnowski thrill ride begins with his subject matter. According to the (ahem!) hallowed hierarchies of art history, Chris Cosnowski is a still life painter, as all of his work fulfills its requirements of being representations of dead and inert objects, set into a composition by an artist. But while for most artists those dead objects would be fruit or cut flowers or the like, for Cosnowski they are pretty regularly figural elements-though never actual figures. He provides us all the attributes of the figure, but as represented in plastic or metal, somehow mediated by the molds from which these athletes, soldiers, animals, Native Americans, and even Presidents are cast. They're made – usually - monochromatic and miniaturized, but they still speak of the figure, and Cosnowski is a still life painter who manages cleverly to evoke narrative and genre contexts. These are never just things, but often elements and actors that reflect vernacular culture, that celebrate with a delightful sense of humor aspects of the human comedy - particularly the male adolescent variety - as transcribed in the often curiously heroic nature of the toys and trophies we give to one another. Such complex stuff, his generous recognition of how close a bowling trophy is to Myron's Discus Thrower, or how three little bits of plastic can very efficiently come together to represent the Fall from the Garden of Eden. Just as Warhol did with cans of soup or Hollywood celebrities, sensing redolent signs of our civilization embedded within mass culture, so Cosnowski does within his specialized niche of popular culture, attentive to the funny but sometimes profound messages we often unwittingly code within our toys and trophies. There's a fundamental amiability to Cosnowski's work, and it conveys a palpable sense of his pleasure in his repertoire. Color plays such an important role in this, it's descriptive, yes, but usually amped up several notches. He loves to use a white or a slightly off white tone for the horizontal base on which his objects reside, and then a variety of truly exquisite background colors, each one different and so perfectly in harmony with his characters as to seem inevitable. (It's interesting to look at his work sometimes as if there were no elements within it, just the white horizontal expanse with a large rectangular color field above it.) And how he renders those elements! There's nothing strange about our affection for skill, to encounter someone who can perform something requiring long practice and carefully honed labor. Cosnowski's got it, that eternally fascinating ability to make oil paint lay down on a flat surface in complete and total simulation of objects existing in the three-dimensional world, to have us say things like "trophy," "soldier," "figurine," while none of those things are really there, there's only paint, paint, paint. He's fascinated by the surfaces of his elements, how light hits plastic, how glossy things attract the eye, how the liquidity of paint is akin to the surface allure of his objects. Take, for example, a recent work such as Bubblicious (and how much this is like an ancient Greek sculpture of a spear thrower!). One can’t help being seduced by Cosnowski’s juxtaposition of this little bronze or gilt metal cast trophy with its hot pink background. It looks as if it’s lit from two sides, and Cosnowski has surrendered himself to the fascinating visual pursuit of trying to render the mind-bogglingly complex way that light careens in and off of it, and how actually abstract high realism can be. Bubblicious indeed!